One of our favorite roads to travel in the US is Highway 1 along the rugged & beautiful California coastline.

The northern part of Hwy 1 starts in Legget California and heads west winding it’s way through the hills and beautiful northern California forest before reaching the coast at which point it turns south, closely hugging the Pacific.

For those who have the time, are willing to drive slow and are looking to be out of range of cell towers and wifi….this is the road for you.

Sometimes these areas will take ones breath away, from both the spectacular views / scenery, but also the steep, high cliffs and narrow, windy road which seems to take up much of this coastline.

The road follows the contours of the land, so every inlet needs to be gone around, i.e. no overpasses or straightened roadway.

Every river crossing means coming down off the cliffs, winding down to the river and crossing a small bridge before going up the other side, winding your way up and around the next series of rocky precipices.

For those afraid of heights, we would recommend not taking this road. 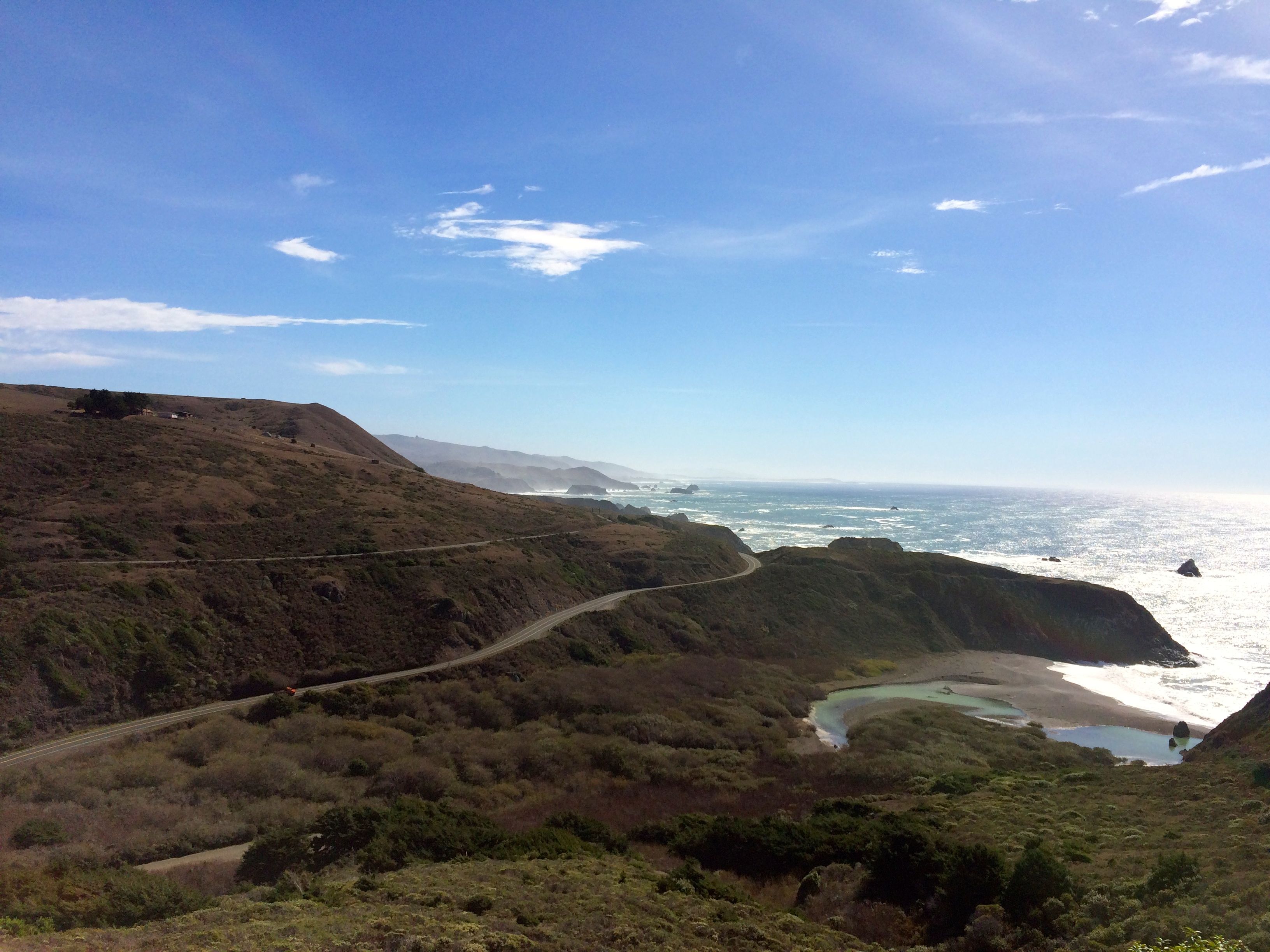 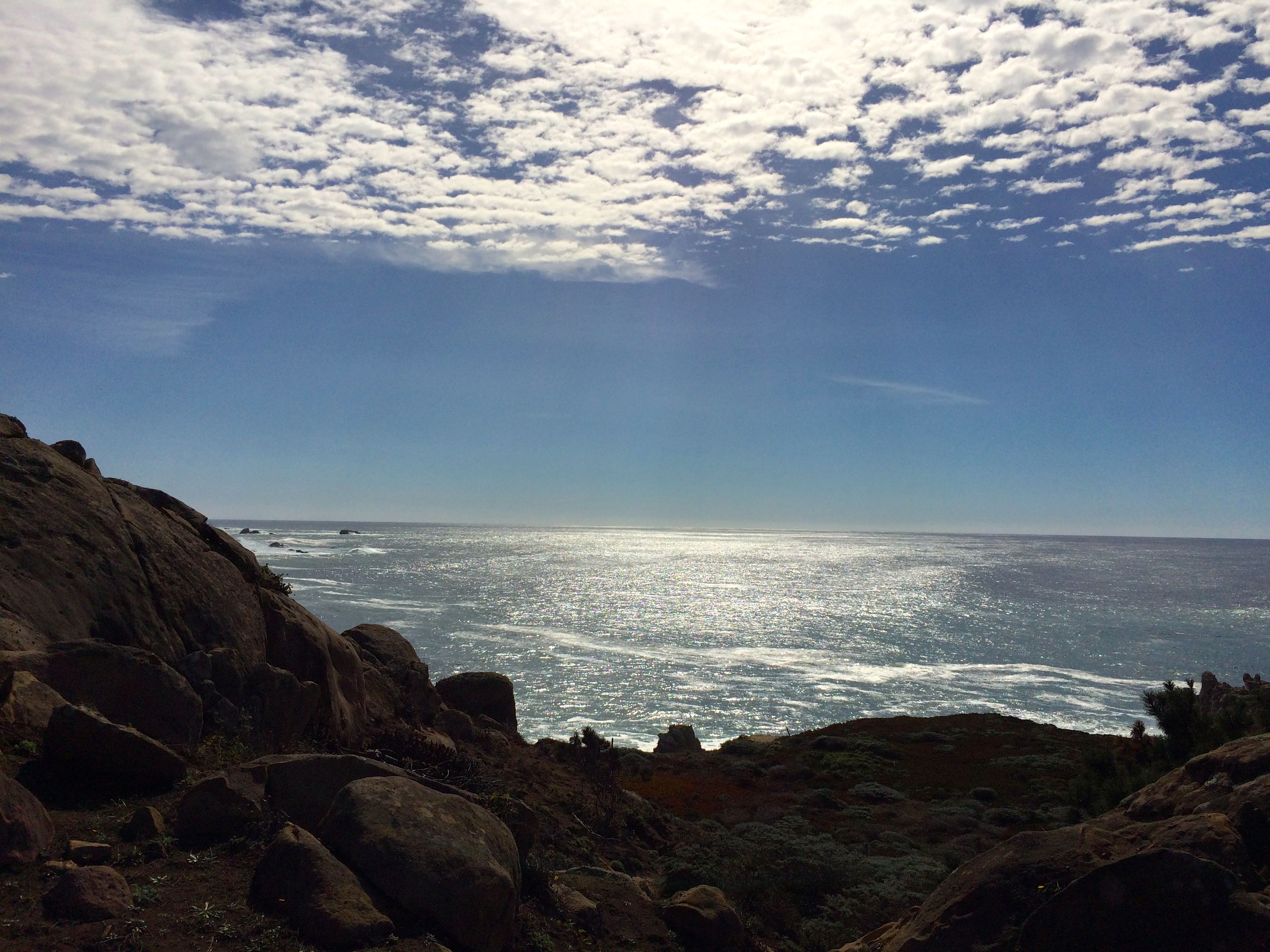 Most of the little towns which dot Hwy 1 can be quite quaint and unique with a rich history.
One of our favorite little towns along Hwy 1 in northern California is Point Arena.

The day we drove into Point Arena, we stopped on their main street ( one block long there abouts ) to admire the old architecture, character and quaintness of this little town.

We parked in front of a sweet little pub named after it's address: "215 Main".
There was a closed sign on the door, but Colleen decided to have a look at the menu and to see what it looked like inside.
As she was leaning against the front door, the door opened and she stumbled into the pub.

“Can I help you?” a very kind voice asked.

Colleen apologized for ‘breaking in’ in such a manner and introduced herself & Chris to Barbara who asked where we were traveling from and what we were doing.

We gave her the short version of our travels & playing music in libraries around the west, and Barbara quickly asked if we would like to play at the pub later in the afternoon / evening.  We asked if dinner may be a possibility, and she said sure, and added to drinks would be thrown in.

The food was delicious and choice of California wines were exceptional and greatly appreciated.
215 Main is a Primal Mates pick for best pub!

Before we left the pub, Barbara invited us to stay in her guest room for the night in her house up on the hill.
( Her house was truly a lovely old, craftsman style bungalow with beautiful gardens & privacy.
It was another nice respite from camping and we thank Barbara for being such a kind, welcoming spirit in this world. )

Across the street from the pub was the old beautiful refurbished Point Arena Theater.
A few musicians invited us over to play at their jam session after playing at the pub.
We were completely awestruck by the beauty of the interior of this little theater.

Etched glass with scenes from the town, back lit to provide lighting on the stairs going up to the balcony along with many other pieces of artwork on the walls.  An airiness & beauty of the theater surpassed any previous theater going experience.

So, we most heartily give a thumbs up to the Point Arena Theater and are happy for the local musicians to have such a beautiful and inclusive place to play. 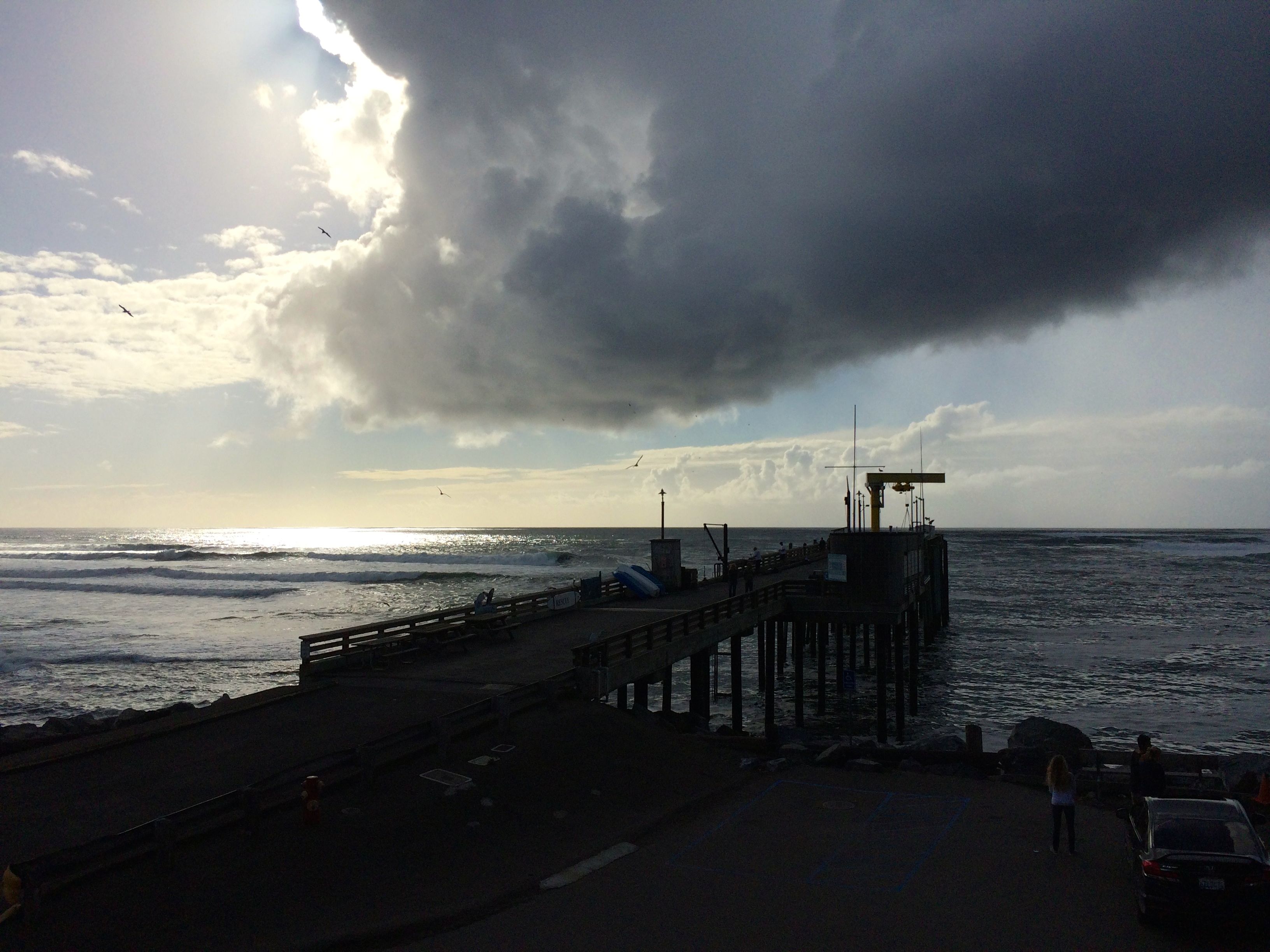 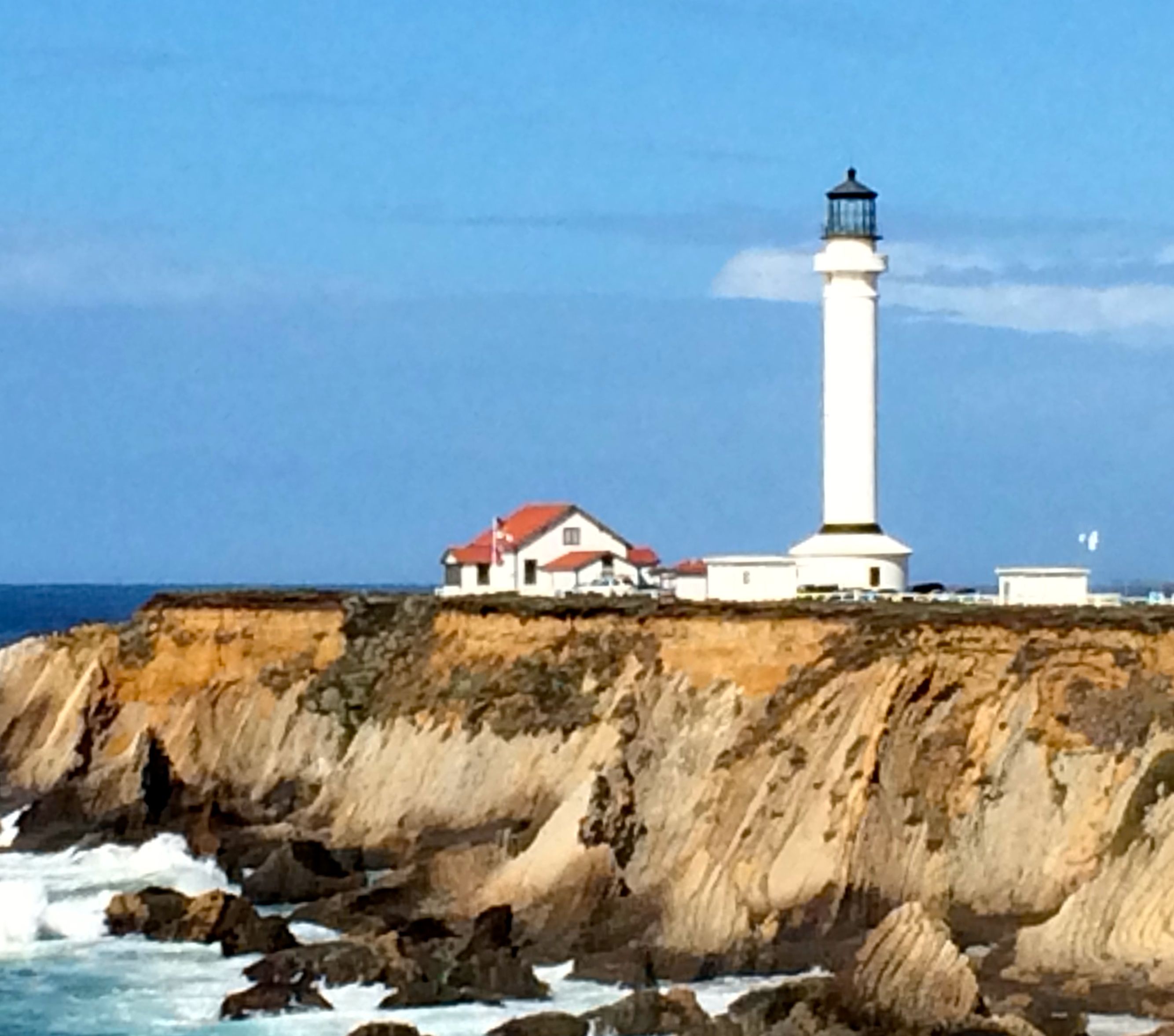 Moving on down the coast, the following site took us by surprise! 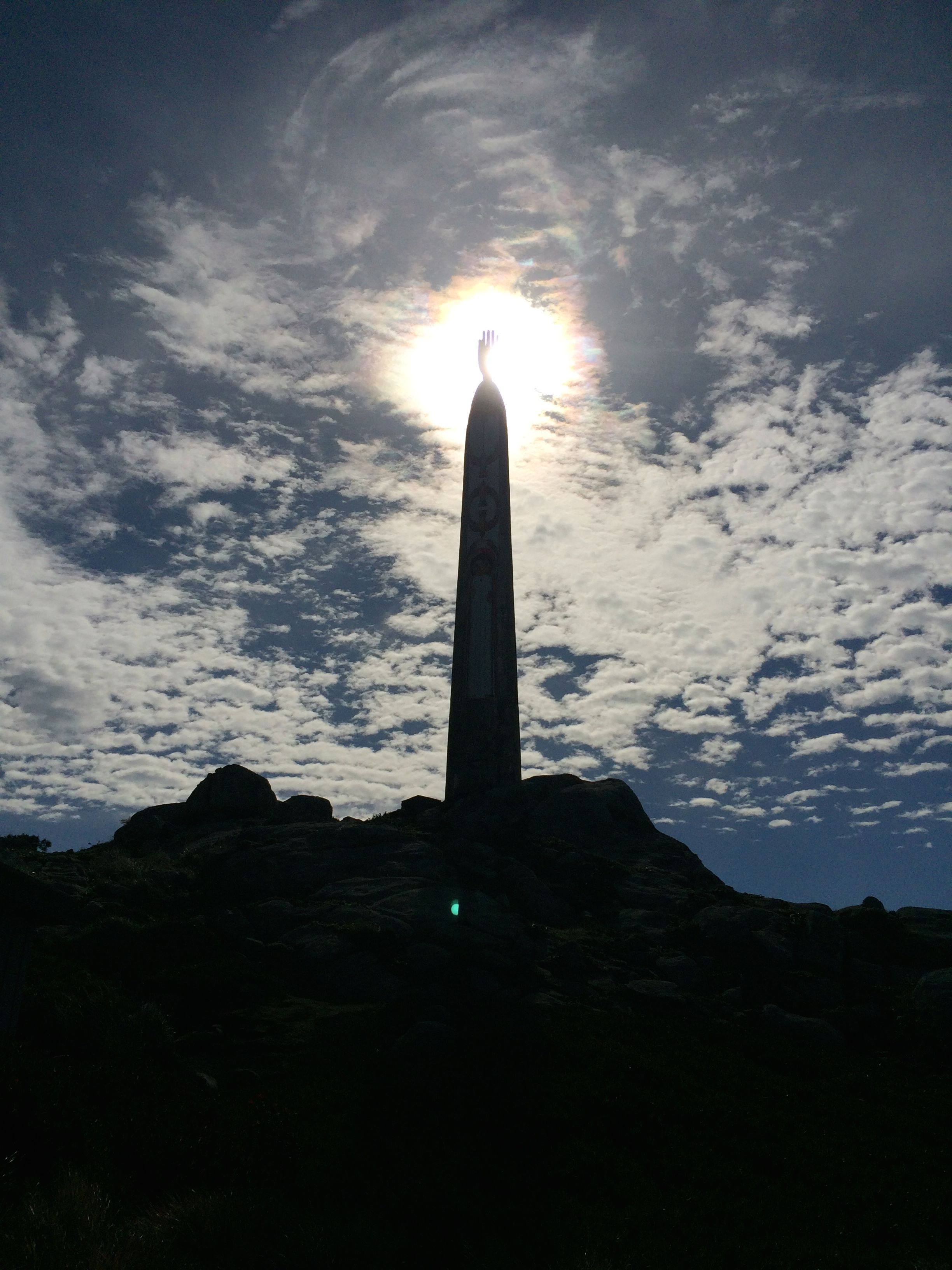 This obelisk seemed to be reaching towards heaven, crowned by the sun! 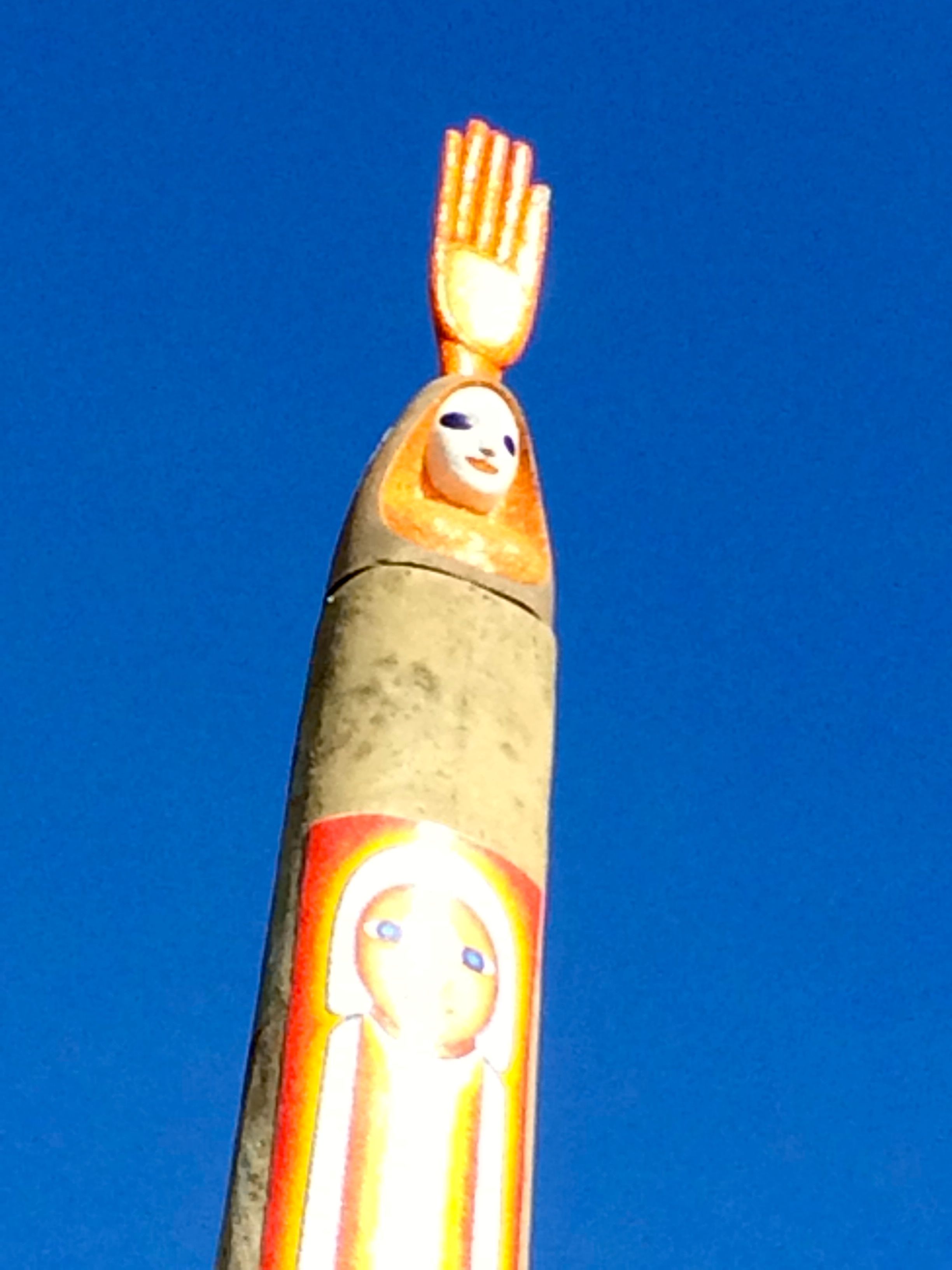 Looking south from the Obelisk 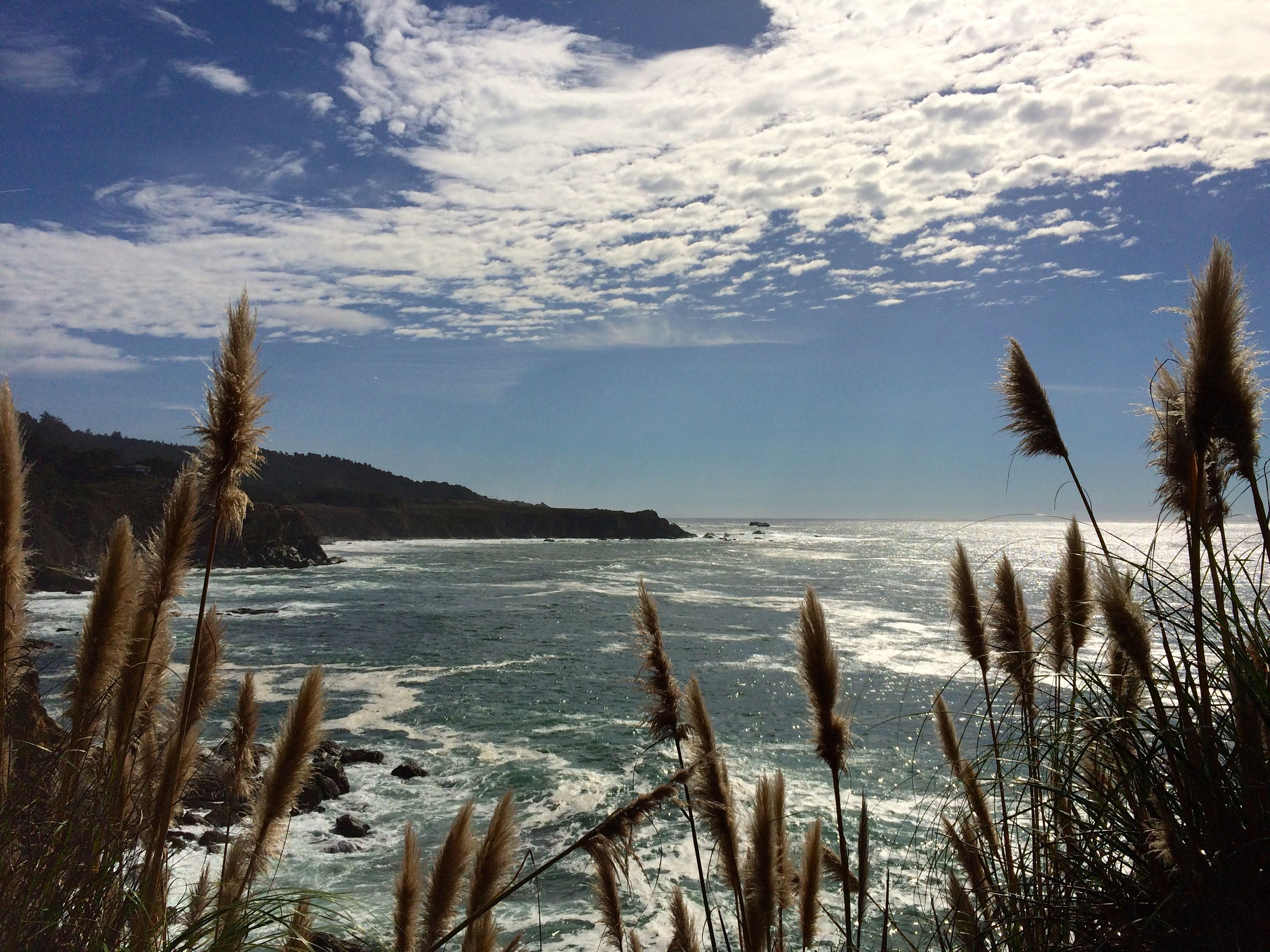 What does it all mean?

Searching back in our memories and looking on the map, we remembered that this is named Bufano's Obelisk in the Timber Cove area of the Sonoma Coast.

The information below is from a Sonoma County website:

"Also known as “Madonna of Peace” and “The Expanding Universe,” the 93-foot sculpture dominates the cliff to such a degree that it’s visible far down the highway and from all nearby beaches and bluffs. The work is made of concrete, mosaic tile, redwood and lead.

Bufano started working on the obelisk in May, 1962, a few months before the Cuban missile crisis galvanized the world.
The reality of Soviet and American ballistic missiles poised for global war doubtless influenced the look of the sculpture (which does, indeed, resemble a huge missile). But Bufano’s missile—decorated as it is with the Madonna and child and topped by a huge open and welcoming hand—is all about peace and world harmony."